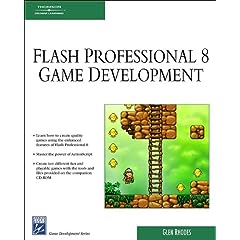 It’s a great book, and I hope people enjoy it – it took a bit of work to put together.

I’m really excited about it, and it covers some of the best things that Flash 8 has to offer in relation to games. It’s currently being used as curriculum material at many educational institutions around the world.

We cover full tile game development (like Super Mario) making use of the BitmapData object in Flash 8, and you’ll get to learn all sorts of amazing things and effects that can be specifically applied to games.

Creating games with Macromedia Flash MX 2004 is a rewarding endeavor for aspiring and seasoned programmers alike. With its quick download time, cross-platform deployment, ease of use, and power, Flash is quickly becoming the program of choice or online game development. The use of vector graphics also makes the games scalable for any resolution from full screen to cell phone.

Intended for both game and Web developers, Macromedia Flash MX 2004 Game Development teaches developers how to maximize Flash for the creation of online and standalone games. The entire development process is covered, from design, story and character development, to the physics and motion of a game, audio issues, optimization, and deployment. As you work through the book, you’ll create eight fun games as you learn and apply the tools of Flash. After completing these projects, you’ll be ready to produce your own high-quality games, and you’ll have the skills needed to take on more complex games. END_OF_DOCUMENT_TOKEN_TO_BE_REPLACED One of the things that Flash handles really well is audio. Flash has the ability to play up to 8 stereo audio channels at the same time, with independent volume and pan controls over each channel. This means that we can get 8 concurrent audio loops going at once, and using volume and pan, we can create our own mixes, and in essence build our own songs. END_OF_DOCUMENT_TOKEN_TO_BE_REPLACED

Macromedia Flash MX 2004 Games Most Wanted is the latest title in the popular ‘Most Wanted’ series from friends of ED. This book presents the definitive selection of game design techniques using the latest version of Macromedia Flash – now the industry standard for creating multimedia applications, used by over one million professionals.

Each chapter covers a distinct area of online gaming, describing the design and development of a finished Flash game. The book delivers as many complete example games as possible and is packed full of the most wanted tips, tricks, and techniques to demonstrate exactly how to produce exciting and interactive games. This is an inspiring sample of all the very best techniques that professional Flash game designers are using today.

Macromedia Flash MX 2004 is a powerful tool, and it allows us to do some amazing stuff. One of its catches, however, derives from the fact that all timing is frame based, and that actual, achieved frame rate is determined by something akin to luck, rather than the actual document frame rate setting.

In truth, Flash attempts to attain the frame rate you have requested, but often will fail, as external processes, or even animation within your movie take over and cause the playback to skip and sputter.

This does not engender much hope for a drum machine, which relies on rock solid timing. In fact, if you look at drummachFrames.swf, and try inputting a drum beat, you’ll see this effect in full swing. It sounds OK, but you occasionally hear the “drummer” lose time, and play a beat late.

Note that in years since, the audio timing has become better and better, and now things like drum machines, dynamically generated audio and effects are easy with AS3.0 Written by a trio of interactive design pros and published by the folks behind the software, this guide is the place to turn when you’re ready to move beyond the manual and leverage all of Flash MX 2004’s power to solve real-world problems. Through a combination of straightforward explanations and hands-on exercises, you9ll learn about such key topics as accessing external data sources, publishing in various formats, and creating elegant and effective ActionScripts. Best of all, the authors share their inside knowledge of Flash MX 2004’s newest features: essential ActionScript 2.0 commands and standards, expanded support for rich media, a streamlined user interface, new Timeline Effects and Behaviors, and more. The companion CD includes all of the files you need to complete the book’s lessons. So what are you waiting for? Get this book and start getting flashy with your dynamic, interactive Web sites.

Forget school math class, Flash math is about fun. It’s what you do in your spare time – messing around with little ideas until the design takes over and you end up with something beautiful, bizarre, or just downright brilliant. It’s a book of iterative experiments, generative design; a book of inspiration, beautiful enough to leave on the coffee table, but addictive enough to keep by your computer and sneak out while no one’s looking so you can go back to that Flash movie that you were tinkering with ’til 3 o’clock this morning. In “New Masters of Flash” the designers told us about themselves and deconstructed their finest effects. This time we’ve gathered the best in one book and simply asked them to go away and do what they do best: play. We give you the code and explain the essence, then you take your inspiration and run with it.